I found the best way to clean whiteboards after 9 tests

It was a good day when I covered all of the walls in my office with big, cheap whiteboards.

It was a bad day, two weeks later, when I realized that big, cheap whiteboards means that I was going to have to deal with unclean whiteboards. 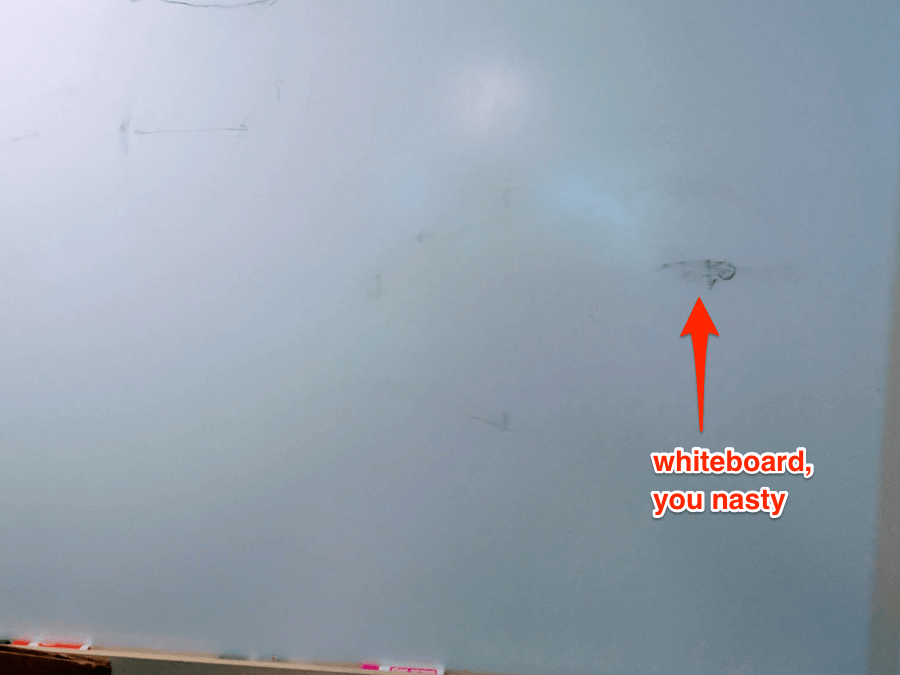 My boards and the eraser that came with my markers (paid link) had failed me, bigly.

Since I use these whiteboards heavily, I decided to launch an experiment! Time to find the best way to clean whiteboards.

I started online, of course. Lots of good articles out there:

I started putting together a list, then decided I was just raid my basement and test whatever I had on hand. I’ve accumulated quite the collection of treatments, lubricants, and waxes from various projects.

I came up with nine contenders for the test. Here’s group 1: 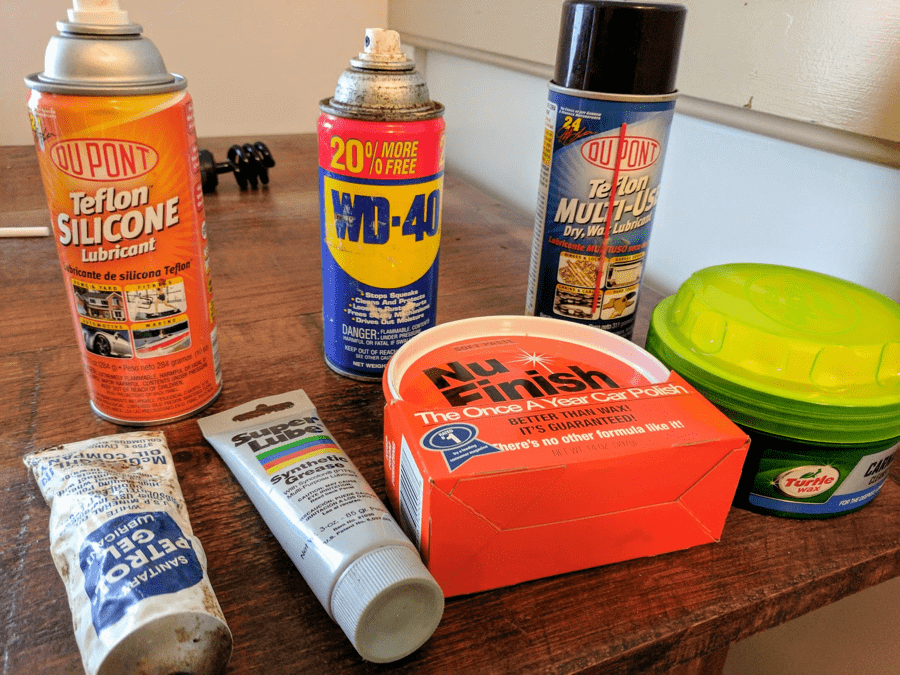 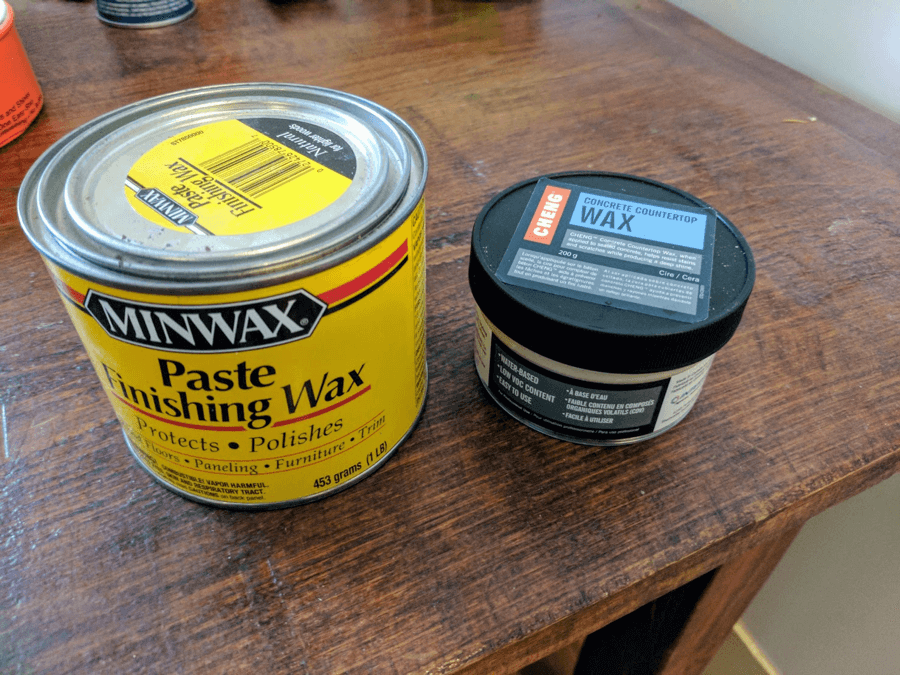 I decided to do two rounds of clean whiteboards testing.

In round 2, I would take my finalists and do a long-term ghosting test.

Round 1: Nine Treatments for Clean Whiteboards

Here’s the grid I set up. The left side had the waxes, the control, and one of the goopy lubes. 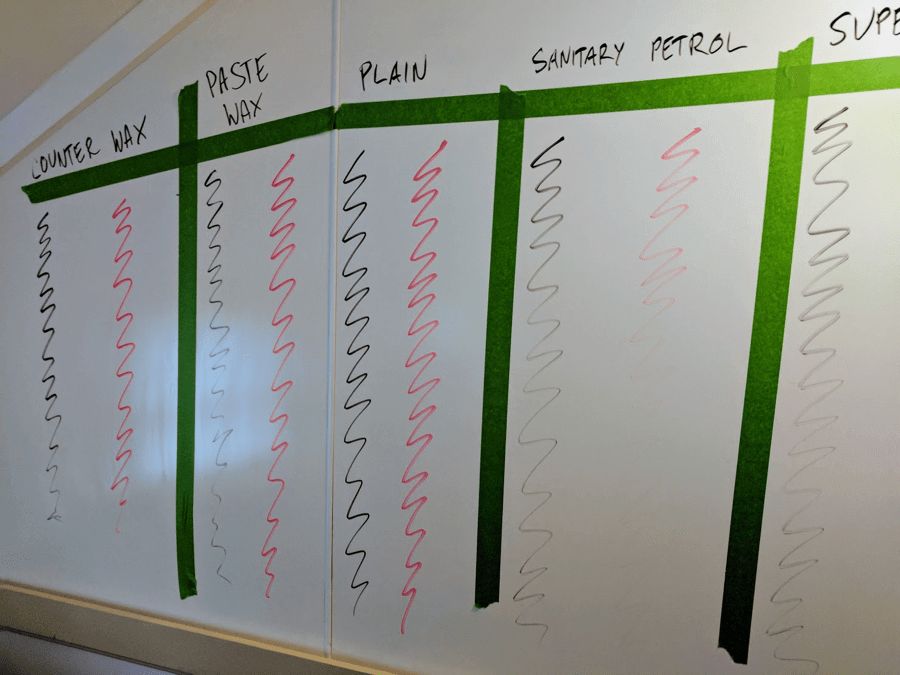 The right side had lubricant sprays and car waxes: 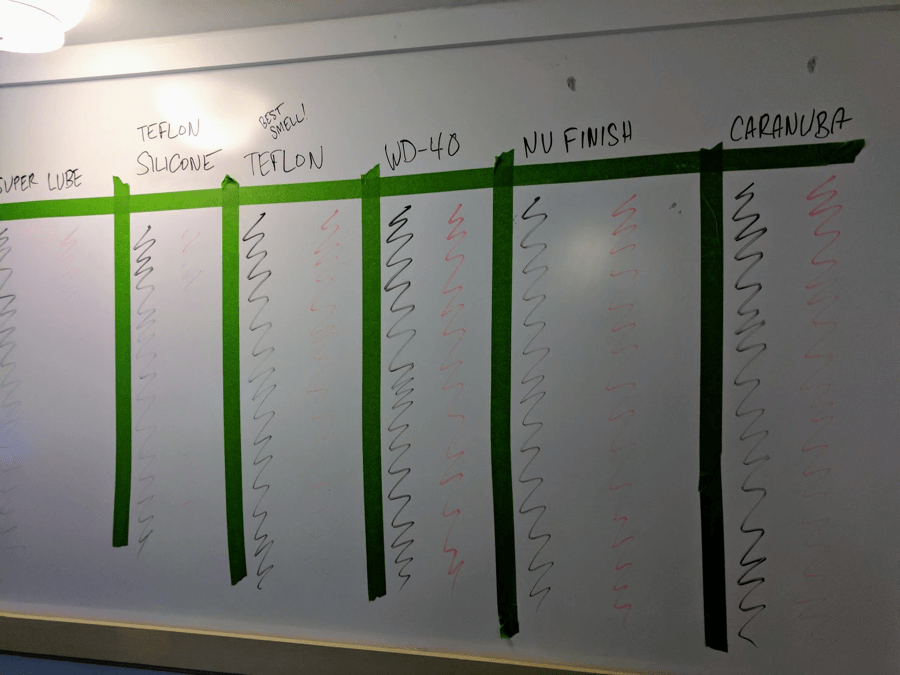 They were all applied according to the label instructions. The lubricant sprays were just sprayed on, and then smeared around with a paper towel until the surface was dry.

Sealing and Cleaning a Whiteboard with Waxes

The first to drop out were the non-car waxes. Cheng Countertop Wax (paid link) and Paste Finishing Wax (paid link) are amazing for our DIY concrete countertops. Whiteboard treatments, though? Not so much.

You can see here that they left a smeary mess when I tried to erase the whiteboard after just one hour. 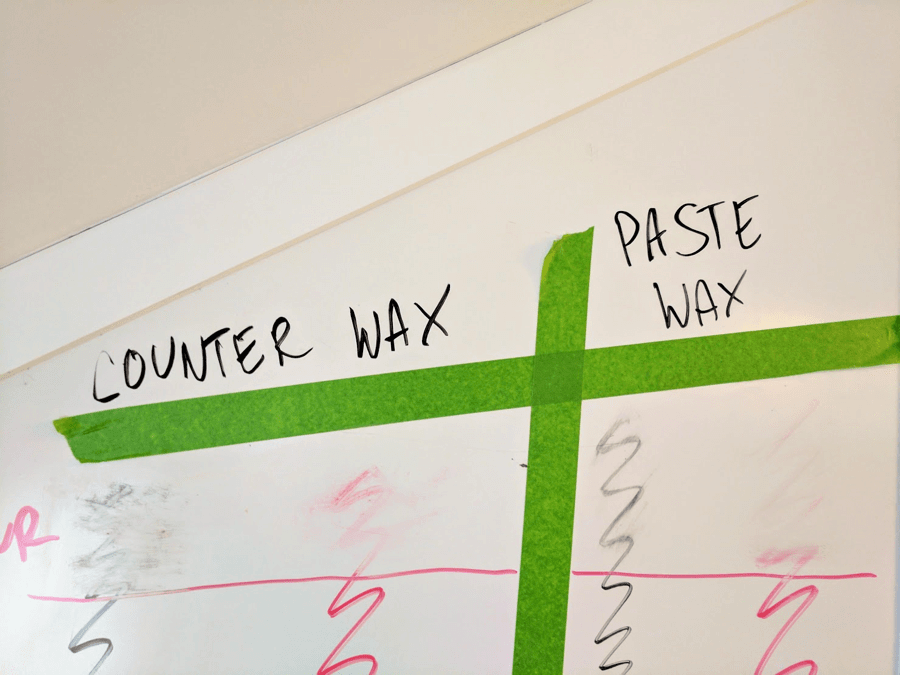 I’m kind of glad, as these were on the more difficult side to apply. Lots of rubbing on and smearing off, then waiting, then buffing.

Two down, seven to go.

Sealing and Cleaning a Whiteboard with Grease

Next to fall – our two grease entries. We use Super Lube (paid link) as a bike chain grease, and this food-safe petrol jelly (paid link) is left over from a meat slicer experiment gone horribly wrong.

These were a smeary mess to apply, and the markers could barely write on them. They were also a mess after erasing after just one hour: 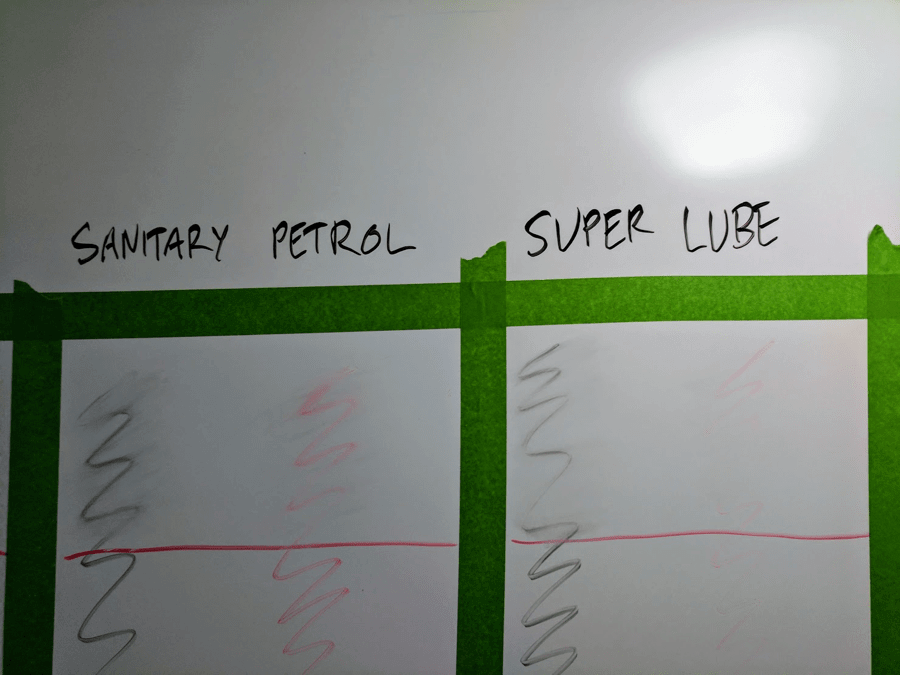 Two more down, which leaves five.

Sealing and Cleaning a Whiteboard with Car Waxes

A friend I rate very highly suggested Turtle Wax as the solution, so I was excited about this test. I was testing Nu Finish Paste (paid link) and Turtle Wax Carnauba Cleaner Paste Wax. (paid link)

These were much easier to apply than the other waxes or the greases, which was nice.

However, I found that the whiteboard markers didn’t write particularly well on them. In general, they did no better or worse than the control in leaving marks.

Here’s what my control looked like when I erased after 1, 2, and 6 hours:

And here’s what the car waxes looked like after one, two, and six hours: 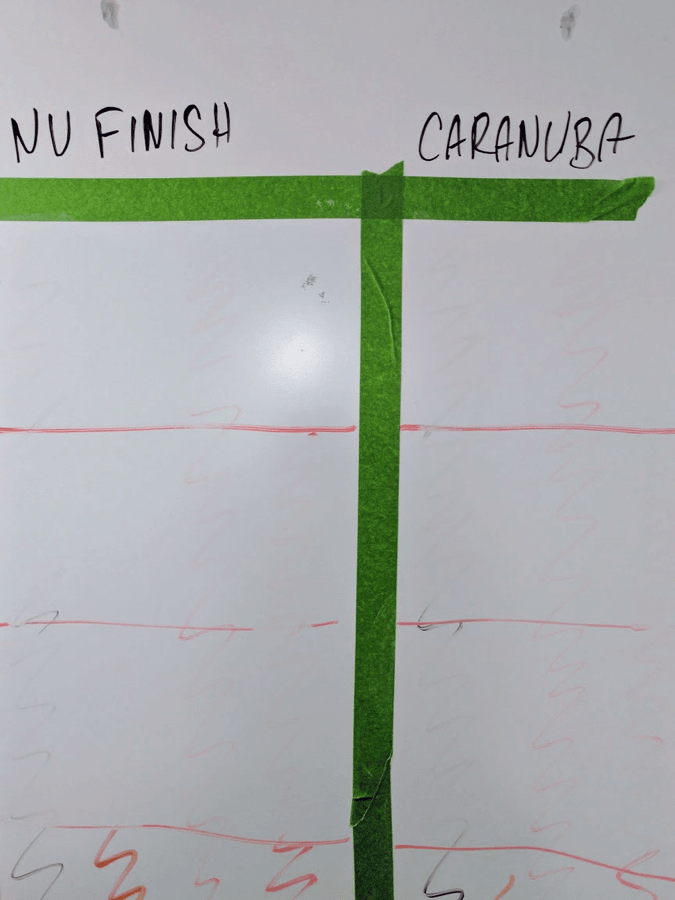 About the same level of whiteboard ghosting.

With two more out, that leaves us with three treatments — all spray-on lubricants.

I was down to three finalists. Picture the old, grizzled gunslinger taking on two recent graduates from UofT Austin. One lives in the Brooklyn, the other is a Silicon Valley techrepreneur:

I had high hopes for the Silicone spray, as did the super helpful guy at the local hardware store.

First, a word on smell.

This group of treatments smells.

WD-40 (paid link) has the familiar shop-class-meets-your-father’s-garage smell. It’s distinctive, though not unpleasant.

The Teflon spray (paid link) had a smell like electrified coconuts.

I don’t have a clever description for the Teflon Silicone Spray (paid link) — it also had a scent.

Let’s see how they did.

It’s a little hard to see in this photo, but the newfangled Teflon Silicone Spray (paid link) was the poorest performer of the three. After three days of testing, it definitely had the most ghosting of these three finalists: 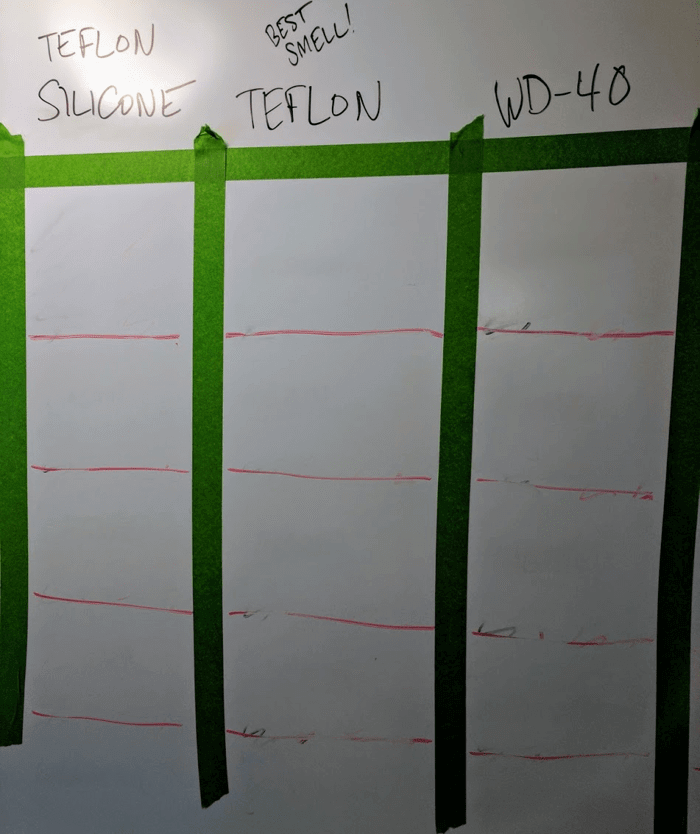 Let’s take our finalists and move on to Test 2!

This second test was a torture test. I took another wall, treated it, and then attacked it with every whiteboard marker in my arsenal: 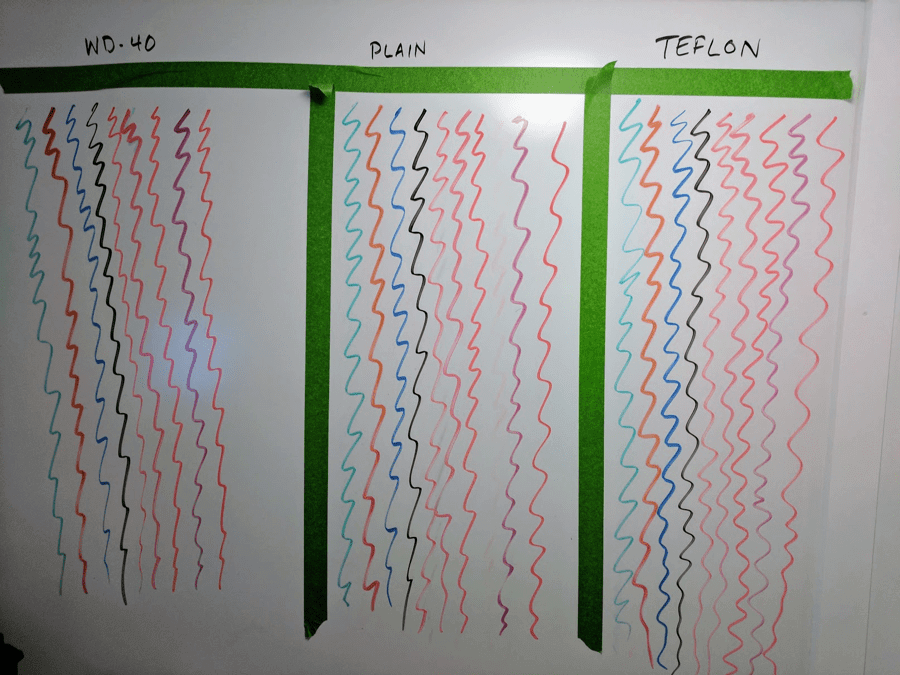 I let it sit for two days, then erased it: 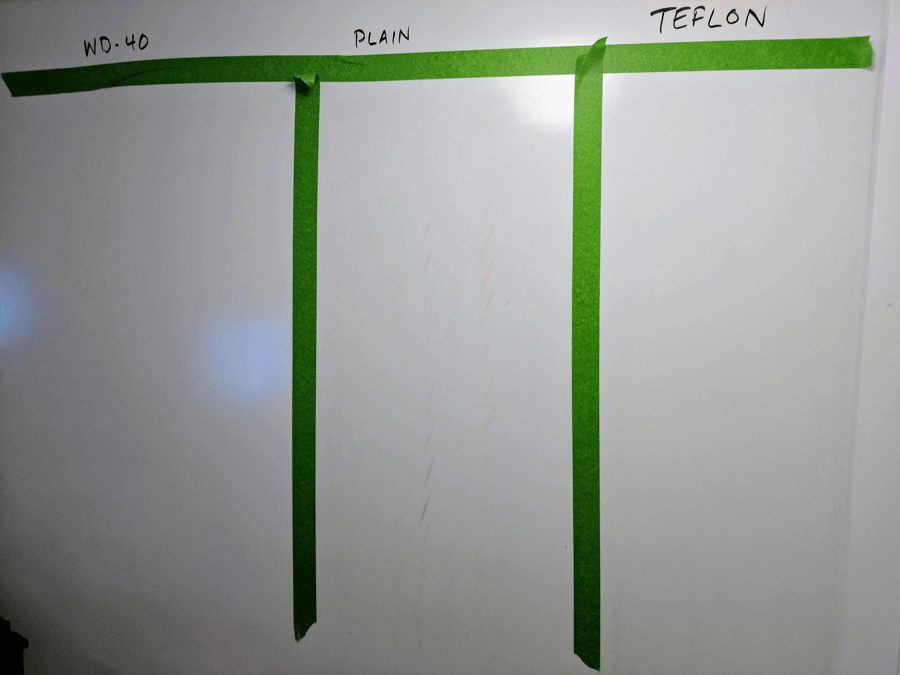 You can already see the ghosting on the control in the middle, but the WD-40 and Teflon are still going strong.

I then repeated this cycle two more times — I left the marker on for two days, erased it, and tried again.

Here’s what my plain control looked like (heavy whiteboard ghosting): 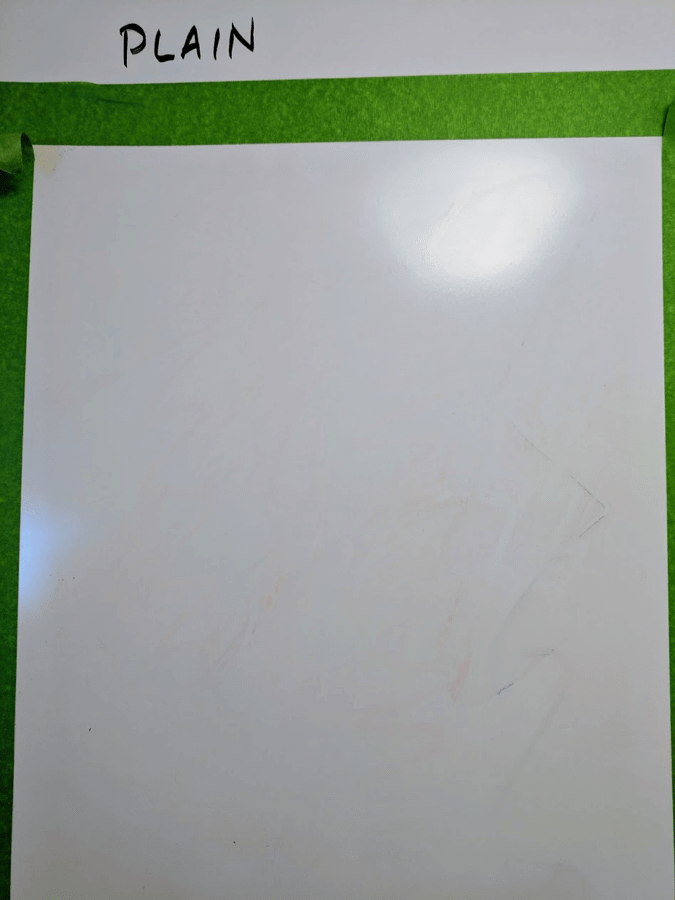 And the Teflon (light whiteboard ghosting): 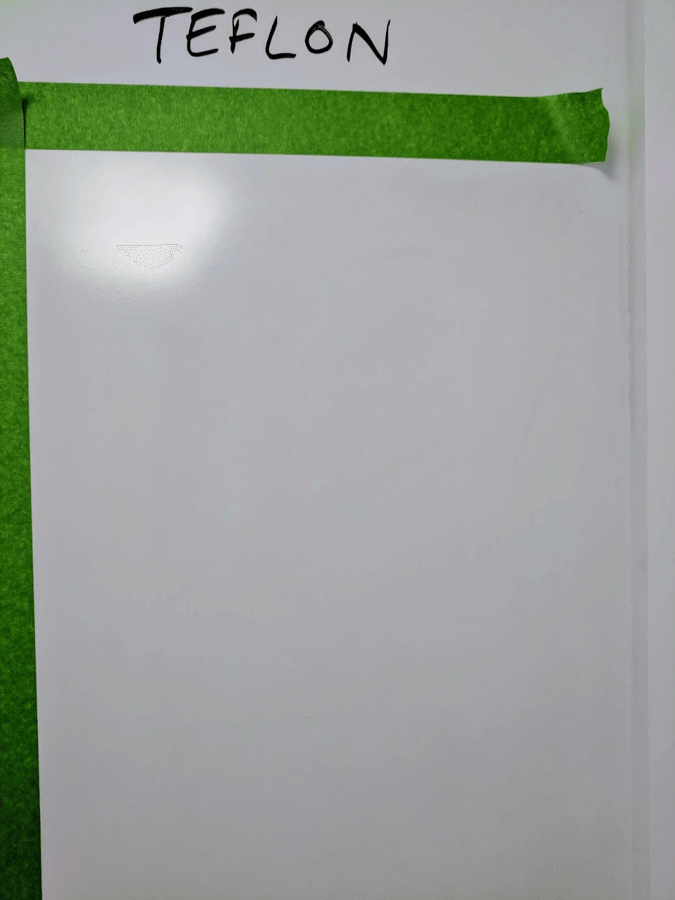 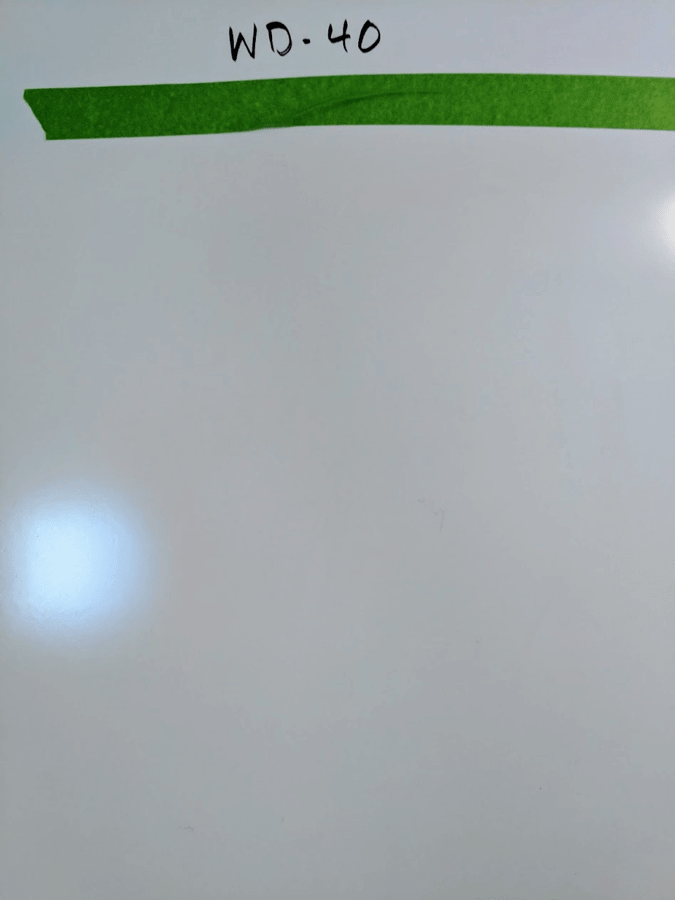 The best way to clean a whiteboard

WD-40 (paid link) is the best treatment for clean whiteboards. It held up under multiple erasings and still looked great after over a week.

It’s also super easy to apply — spray on, wipe off with a paper towel.

It has a distinctive odor which I didn’t mind, but you might want to test it a bit before going nuts.

I also learned a bit about cleaning whiteboards throughout this whole process.

First, don’t bother with those whiteboard erasers (paid link). They won’t help you one bit unless you have a brand new board or are writing on glass.

Instead, get yourself some microfiber towels (paid link). They’re excellent for cleaning whiteboards.

Next, don’t bother with those tiny, expensive spray bottles of “whiteboard cleaner.” (paid link) We also tried these alcohol wipes, (paid link) but found them fragile and difficult to use. We had to use a lot of them to clean even a single board.

Instead, buy yourself some rubbing alcohol (I’ll put a link here, (paid link) but it’s way cheaper at your local drugstore). Put it in a really nice looking spray bottle (paid link) that you won’t mind seeing every day.

What do you think? Have questions? Or maybe you have your own results you’d like to share? Pop them in the comments below.

And don’t forget to share this article with your whiteboard-loving friends!

As an Amazon Associate, I earn from qualifying purchases.